The name Alpen means "Alps" in Norwegian.  When you come to our home you will see why we chose this name.  Our house resembles one you would find in the mountains.  We enjoy our peaceful life away from the big city with our 3 children on our small farmette with horses and also a few other farm animals.   In addition, Karen has been raising TICA registered bengal cats for 14 years.  Steve is a professional painter and also a horse trainer.   Karen does professional animal photography at animal shows and fundraising events.

We believe strongly in having our children be a large part of our lives, both at home and in business. Our kids are young and a big part of raising puppies and kittens both.  They love to accompany us when we do our fundraising photo shoots.  A puppy from Alpen Elkhounds is sure to get plenty of love and socialization!  We are starting a new chapter here which is dog sledding!  We will be posting updates of our elkies progress. 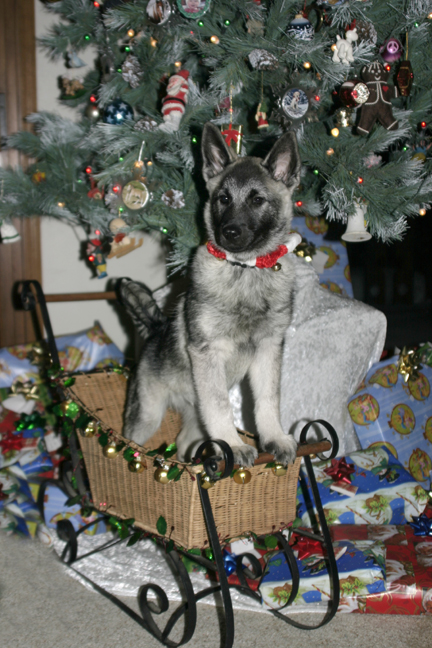 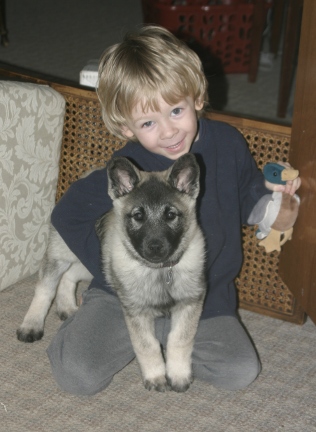 The Norwegian Elkhound  is one of the most ancient breeds being thousands of years old and has originated in Scandinavia.  There have been skeletons found that are similar to today's Norwegian Elkhound dating from 4000 to 5000 BC!  They were the original dogs of the Vikings and worked as a hunting and guard dogs. The dogs were used as hunters in tracking big and small game animals such as moose, elk, bear, mountain lion, badger, lynx, wolf, reindeer and rabbit. They would track the quarry and alert the hunter by barking and holding the animal at bay until the master arrived. Elkhounds have an exceptionally keep sense of scent and can smell game from over a mile away.  The name "Norwegian Elkhound," is a direct translation from its original Norwegian name "Norsk Elghund," meaning "Norwegian moose dog".  The breed is also highly prized as a sled dog.

The friendly and reliable character of the Elkhound makes it a wonderful and cherished family pet.  Elkhounds are alert, bold, loyal and friendly. Although they can be somewhat reserved with strangers, it will greet family and friends it knows with enthusiasm. They are good child companions and are quite affectionate and trustworthy around them.  Similar to other Arctic dogs, the Norwegian Elkhound has a mind of its own and does require consistency in training.    The breed was first exhibited in 1877 when the Norwegian Hunters Association began holding shows. The AKC first recognized the breed in 1913. In 1923, the Elkhound Club was formed and the breed was officially recognized by the British Kennel Club.  The Norwegian Elkhound is a very unique breed with many talents which includes: hunting, tracking, herding, watchdog, guarding, sledding, and agility.

Elkhounds are a Northern Spitz type breed of dog.  They are a medium sized  sturdy dog typically measuring 18-21 inches in height and 40-70 pounds in weight.  Generally they are a very hearty breed of dog.  While some can be prone to hip displaysia and cysts, they are a more natural breed which is also known for a long lifespan of 12-16 years. 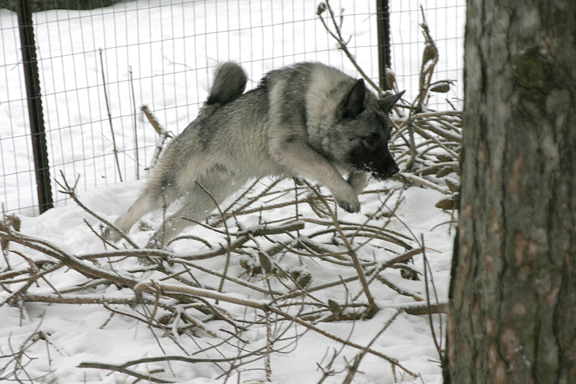